Sloan Field
Midland International Airport was originally Sloan Field, a small airport started in 1927 by Samuel Addison Sloan. Sloan leased 220 acres of flat grassland from Clarence Scharbauer, a rancher. Sam Sloan was killed in 1929, and his brother, William Harvey Sloan, continued the operation. In 1939 Harvey Sloan sold the field to the City of Midland for $14,500. 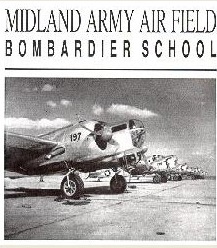 Air School
Prominent businessmen in Midland could foresee the possibility of a military base in West Texas. In 1940, after Hitler struck Poland, they started promoting the airport for use as a training base to the military establishment in Washington. Work was done by the WPA with more runway and taxiway improvements, as well as airfield lighting. A visit by Brigadier General G.C. Brant, Commander of the Gulf Coast Air Corps Training Center at Randolph Field was made and he reported that the situation at Midland was very favorable. It was on Friday, June 13, 1941, that it was announced that Midland would get the air school.

Target Ranges
Immediate search for ranch land to be used as target ranges was instigated and plans for "an advanced twin-engine flying and bombardment school" had begun. Ground was broken on July 15, 1941 with the leasing of 1,030 acres of land for the duration of the war plus six months. Twenty-three bomb ranges were mapped out - located within a 50-mile radius of the base.

Structures
One of the first structures to go up was the 500,000 gallon water tank which is still in use. Buildings for Headquarters, officer, enlisted, and cadet barracks, a station hospital, classrooms, mess hall and flight line were all being erected by civilian employees.

Need For Bombardiers
By the time the first enlisted man arrived in October 1941, he found that 105 buildings were partially completed with the remaining 99 waiting to be started. In November 1941, officers and enlisted men started arriving for duty. It was announced that training of cadets would begin in January 1942. With the bombing of Pearl Harbor on December 7, 1941, the need for bombardiers was evident, soon after an announcement was made by Lieutenant Colonel Isaiah Davies, Commanding Officer of Midland Army Air Field (MAAF), that the school would be used exclusively to train bombardiers. 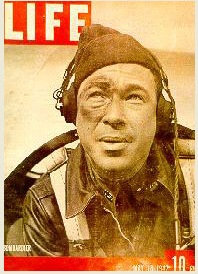 Bombardier College
The sole purpose of the Bombardier College was to train young men to use the bomb sight invented by Carl Norden. Cadets remained at Midland exactly 12 weeks for combined ground and flight training, rigorous physical activity, and rigid military discipline during a 16-hour day, with only part of Sunday off.

They learned to hit targets with remarkable accuracy, dropping at least 200 practice bombs each from the AT-11 airplane, and learned to handle the complex Norden sight with considerable skill. The first class consisted of 103 cadets and graduated on April 30, 1942. The last class to graduate was in January 1946. Students from the Netherlands, East Indies, France, Brazil, and China were trained at MAF. There were over 8,000 cadets trained at this base from 1942 to 1946.